Home › Reviews › Justice in the mouths of lizards

Justice in the mouths of lizards 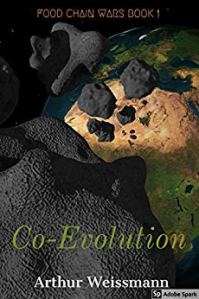 There is a primal rage that exists within many of us that desires a special kind of hell for those hard-core criminals who commit rape, molestation, and murder, and while this fantasy of unmeted justice might simmer deeply within our subconscious minds, such wish-fulfillment is rarely realized within our popular culture.

After all, there is something brutish and uncivilized about demanding the worst kind of death, even for society’s biggest miscreants, especially since many of us seem to believe we are greater than our pettiest hopes for vengeance.

In Co-Evolution, author Arthur Weissmann casts this hypocrisy aside and provides a wrath worthy of modern life’s worst foes, offering delightful deaths to the hardest and most heinous of convicts, greatly satisfying readers’ retributive bloodlust.

In this novel, a truce has been reached after thousands of years of near-genocidal fighting between human beings and a lizard-like species that evolved alongside our own and that continues to crave our flesh to this day. Humanity persevered, built great cities, and learned how to defend itself, with our most loathsome criminals offered as food in exchange for maintaining a tentative peace with our reptilian rivals.

The plot unfolds over a series of loosely related crime stories that center around Detective Victor Pargner of the Wetlands City Police Department, whose knack for solving mysteries of wrongdoing, along with a swift legal system, ensures that deserving convicts are quickly sentenced and ‘fed off’ to the lizard-like species.

Thus, there is no shortage of carnage in Co-Evolution, but Weissmann’s style is so amusingly matter-of-fact, there is also no overly explicit gore detailed in the violence, either, to the extent I’m actually contemplating reading one of the chapters as a bedtime story to my daughter, a storyteller herself who might appreciate the bad guy ‘bastards’ getting what they deserve almost as much as Victor’s son, Hector.

The sweet and simple absurdity of the premise, along with the pace of the novel, makes for easy and fun reading. While there is a twist to the overall story arc, it’s a slow burn and, in my opinion, not nearly as juicy a payoff as the chapter by chapter tidbits.

The Fun Side Of Science

THE APOCALYPSE IS CALLING, CAN YOU SING ITS SONG?

Fast fiction in the superhero genre.